The Naked Truth About Breast Implants From Harm to Healing 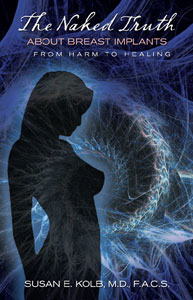 The Naked Truth About Breast Implants From Harm To Healing

This book is a testament to two important journeys of discovery which merge in the person of Susan E. Kolb, M.D.

The first is the recognition and definition of an important, modern, and environmentally caused new disease, which according to the rules of naming medical disorders is best called siliconosis. Dr. Kolb has made major contributions to this recognition and is one of a limited number of physicians qualified to bring these matters to more general attention. She prefers the equivalent term, silicone implant disease, which conveys to the afflicted patient a more direct statement of cause and effect.

The second journey is even more remarkable: Dr. Susan Kolb experienced the same adverse effects from her own silicone based mammary implants that impacted literally hundreds of thousands of other women.

This book is timely. Against a great deal of research and clinical evidence in the peer reviewed literature in many fields, some dating to before 1950, the American Food and Drug Administration partially reversed its incomplete moratorium on silicone gel content silicone mammary implants in 2006. The ban, imposed by FDA Commissioner David A. Kessler, M.D., J.D. in 1992, was based on such issues as prevalence of rupture with release of silicone gel and oil to elsewhere in the body, fibrous deformation of the chest wall, and a high risk for replacement far short of stated claims of product longevity. What was not taken into proper account was the immunogenicity of silicone. Had it been, so called saline content devices would have fallen under the moratorium as well. It is the contact of the outer surface of the silicone shell that stimulates the immune and inflammatory response to which are later added the cogent problems of infection, biofilm formation and scar contracture.

Although controversial at the time, and contested strongly by implant surgeons and even more strongly by the manufacturers of these alien devices, the partial ban of silicone implants had a remarkable counter effect. The frequency of implantation of saline content silicone devices rose substantially for the rest of the decade.

After consultation with basic scientists at the University of Tennessee, in particular the then medical director of the Memphis Pathology Laboratory, David L. Smalley, Ph.D., and my then clinical chairman (Obstetrics and Genecology), Frank W. Ling, M.D., and others, I began a clinic to explore the effects of implanted silicone devices of all kinds, not just mammary prostheses, in February 1996. The timing was in response to the evident lesions formed in the tissues surrounding the devices, the axillary and other lymph nodes and a complex matrix of systemic signs and symptoms new in the health experience of hundreds of women. What was unexpected at the time was the rapidly increasing number of women coming to clinic with adverse effects from their saline content silicone devices.

It was immediately obvious that most of them did not understand that the phrase “saline implants” was a deliberate simplification by the manufacturers, the spinmeisters and some surgeons, to bypass the uncomfortable and inconvenient truth they were basically silicone devices which happened to contain saline rather than other, more liquid silicones. Dr. Kolb describes this accurately and effectively later in this book.

Now that many aspects of the restrictive conditions of the partial moratorium have been removed, we are on the verge of a new epidemic wave of anterior thoracic scarring, chest and axillary deformations, device rupture and migration of small amounts and lighter weight silicones throughout the body, all with their attendant and often vigorous immunological and neurological consequences.

This book, written with clarity from her experience, both as patient and as surgeon and with the wisdom gained from her hundreds of patients, is a cautionary tale for the near and distant future. What comes to the fore are the dysfunctional reviews of science practiced at the FDA these past ten years or so and the innate conservatism of many physicians to reject what is new, no matter how strong the evidence.

Medicine as practiced is a disconnected receptor system for information in which those with vested financial interests have the power to force the conversation away from basic truths, even to attempt to discredit those physicians and researchers with abundant data and no personal axe to grind, to use the common metaphor of a past generation. 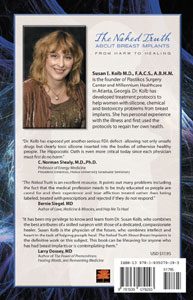 Dr. Kolb’s record, as both an implanting and an explanting surgeon, shows her to be a clinical researcher of the finest type, and as a woman afflicted by siliconosis, is unassailable by those forces and interests.

Her abilities as a surgeon and a caring physician were the two reasons, during my active clinic years, 1996-2002, I referred more patients to her than to any other explant surgeon. This book, which so well displays the double journey she has undergone, now with a deep understanding of the nature of the disease and how best to help her patients enter the healing process, justifies completely the confidence I had in the late 1990s. She touches on the problems of silicone disease as one of many now emerging environmental threats to human health, some of which, like siliconosis, are due to alien chemicals in the human body.

This book is neither an exposé nor a diatribe. It is a call to allow the self correcting scientific method and process, based on data, not opinion, to be applied to those now emerging disorders of the modern world. The same must be said of the now re-emerging problems of siliconosis. It is the diary of a pilgrim bearing the professional burden of deep knowledge and the agony of her personal experience.