The Latin definition for labia minora is translated to mean small lips. These external genital structures are the closest to the vaginal opening and are the lesser inner lips just inside the larger labia majora structures that surround and protect the vaginal and urethral openings. Many women dislike the large protuberant appearance of their labia minora, especially if they hang, are asymmetrical (different size or shape from each other), are thick or dark edged, or just plain BIG. This may cause severe embarrassment with a sexual partner. The overly large labia minora can also result in constant irritation in tight pants. It may really bother someone who is very athletic as well. Surgical labial reduction can greatly improve the aesthetic appearance and function of abnormally enlarged labia. Some women are born with large labia while others may develop this condition with childbirth or age.

The labia majora consist of the larger folds of skin that are generally covered by pubic hair and are composed of adipose (fatty) tissues. In some cases the majora become hypertrophic because of childbirth and/or weight gain. They may sometimes be improved by liposuction. In more severe cases, surgical reduction is necessary.

Un-hooding of the Clitoris or Clitoral Unhooding

Some women have thickened skin over the clitoris. This can interfere with stimulation and decrease sensitivity. When this hood is removed surgically, the woman may enjoy greater and more intense stimulation often leading to more intense orgasms.

Reduction of the Mons Pubis

When a woman has excess fatty deposits in the hair bearing area of the lower abdomen, referred to technically as the mons pubis, she often feels that she looks like a man when she is wearing pants. This can be corrected by liposuction.

The enlarged abdomen is often a consequence of weight gain or childbirth, and can be improved by a surgical procedure called a “tummy-tuck” or abdominoplasty, while tightening the abdominal muscles.

Elevating the aged Pubis and Escutcheon

As we age, gravity causes all parts of our body to descend. Therefore, the pubic hair, mons and vaginal region also descend, causing an aged appearance. This procedure is often combined with an abdominoplasty.

Located at the apex of the labia majora, superior to the urethra, the clitoris is one of the structures that are important for female sexual response. Generally it is a small, covered structure composed of erectile tissues that become enlarged when filled with blood from stimulation, similar to the Corpus Cavernosum, and Corpus Spongiosum in men. It is covered by the prepuce tissue—the surrounding “hood” that sheaths the clitoral node on three sides. Normally, the prepuce is anatomically designed to offer the clitoris a degree of protection against undue abrasion—or over stimulation—and naturally retracts during sexual intercourse, thereby leaving the highly innervated surface of the clitoral node—what is commonly referred to as the exterior G-spot—or Glans, to be more exposed . . . resulting in female sexual orgasms. Sometimes however, women with small clitoral nodes or those that have excess Prepuce tissue—both common conditions—find that they can’t achieve orgasm, or have a harder time reaching climax, because the clitoris is literally covered, or restricted by too much skin tissue, thus greatly lessening tactile sensation, and/or even eliminating it entirely.

Generally considered being the musculo-membrane tube that extends between the opening of the cervix uteri and the vulva. Anatomically, it is much more complicated than what is generally communicated. The uppermost part is divided near the cervical orifice into four fornices—small vaulted chambers. There are two laterally, one to each side of the cervix, one to the rear, the posterior fornice, and the front cavity, the anterior fornice. The length of this opening varies but is generally four to six inches in length.

The hymen is a small fold of mucosa that partially covers the entrance of the vagina. It does NOT entirely cover the opening despite the propagation of rumors that to have an intact hymen means that one is a virgin. Medical data reports that pregnancy has occurred even when an intact hymen is present. Hymenitis is an inflammation of the hymen or of the membrane itself.

Commonly defined as pain in the pelvic region of women, the vagina or labial structures, during or after sexual encounters. The causes can be infection, inadequate vaginal lubrication, atrophy of vaginal mucosa caused by rejection of surgical mesh, and others.

Largely considered to be a bladder hernia that extends into the vagina. Cystoceles often result from common labor delivery, from pressure injury to the vesicovaginal fascia, weakening the supportive structure. They can lead to incontinence problems including the need to urinate frequently, and dysuria.

A hernia that extends from the anterior (front) wall of the rectum, into the posterior (rear) wall of the vagina. Depending on severity, this condition can create long term issues with vaginal infections and pain and should be repaired when found. 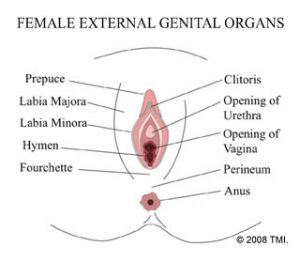